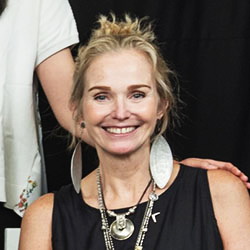 Lindsey first put her BA Hons degree in Creative Arts to work at the Arts Council of Great Britain and the Gulbenkian Foundation implementing the 'Arts in Schools Report'. 23 years ago she left the UK to travel for a year before arriving in Hong Kong.

In 1993, Lindsey founded the Hong Kong Youth Arts Festival (which became the Hong Kong Youth Arts Foundation in 2006). Every year, she creates at least one major performance to be staged locally (either an original piece or an adaptation). In addition, she has toured theatre pieces to the Edinburgh Fringe Festival and an exhibition to the Australian Festival of Youth in Adelaide.

Lindsey was recognised in the New Year's Honours List 2006 as an Officer of the Order of the British Empire (OBE). She received this in recognition of her commitment to education and for her contribution to UK arts overseas.

Greatest HKYAF memory…
Probably the moment that changed my life was meeting Po Chung 21 years ago. He had founded a group “Business for Arts” who gave seeding money to new projects. Fantastic, I thought - problem solved! After I presented my idea of HKYAF to the group they politely asked me to update them as the project progressed. This was not what I wanted or expected to hear!

So I approached Standard Chartered Bank for an overdraft, which I was miraculously given. I then created a programme of events, invited schools and artists, booked venues and printed a programme which I posted to everyone! After several days, I received a phone call from Po Chung and he congratulated me on making it happen and enquired who my sponsor was as there were no logos on the materials I’d sent him. I told him about the overdraft and he invited me to his office the following day. When I got there he was sitting at his massive desk with his cheque book out.

“How much is your overdraft?” He wrote a cheque.
“How much do you need to make your festival happen?” He wrote another!

This was a fantastic lesson. From that moment on I have been prepared to take a risk, if I wholeheartedly believe in something, then I have to ‘go for it’ and always believe that whatever it is I want, I will get!!

If I could meet one artist...
Isadora Duncan, the mother of modern dance! She is my spirit guide. When I need inspiration, I appeal to her to extend it to me… so I’d like to actually meet this influential person face to face.

“Let us first teach little children to breathe, to vibrate, to feel, and to become one with the general harmony and movement of nature. Let us first produce a beautiful human being, a dancing child.” Isadora Duncan

A superpower I want…
The power to bend peoples will… to make sponsors cheque books fly open and their pens to add multitudes of zeros would be nice!!