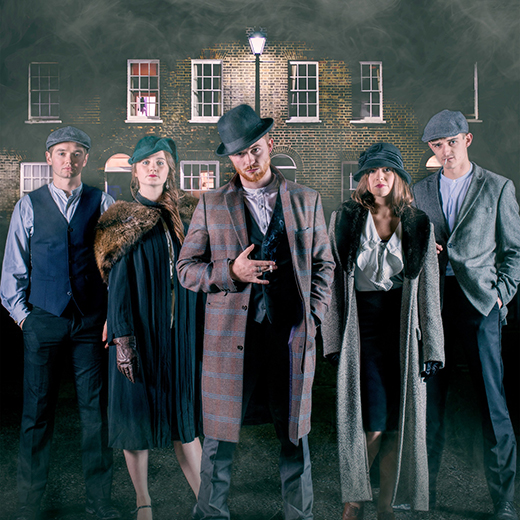 Through an explosive physical style, Tobacco Road tells the story of five resourceful young men and women attempting to carve out a place in the murky underworld of 1920's London. In the wake of the Great War, can they find the fame and wealth they crave or will their desperate need to belong lead to disastrous consequences?

Incognito Theatre seek to explore the stories that have gone untold in many history books, from the day- to-day struggle of being a female gangster in a male-dominated world to the complex and impossible standards of masculinity. Tobacco Road is a magnified examination of the real people who had to forge a life for themselves in a world that had ignored them. By shining a light on gang activity, this exciting production investigates how young people find themselves embroiled in gang culture and why people felt they had no other option but to go into crime.

‘Incognito is a company that oozes talent and panache, and Tobacco Road is a must see of this year’s fringe.’ Edinburgh Guide

Part of ArtisTree Selects: Theatre Bites. Theatre Bites offers five irresistible and bite-sized British plays presented in collaboration with Lindsey McAlister, founder of Hong Kong Youth Arts Foundation (HKYAF), and Tony Awards-winning producer Brian Zeilinger. Tuck into everything from highly entertaining tales of spies and gangsters, to the most hotly debated global and social issues of our time: environmental, gender and diversity. Presented alongside the thought-provoking live performances, Theatre Bites will give you the chance to see what happens behind the scenes through open rehearsals and talks for selected shows.

Other ArtisTree Selects: Theatre Bites Programmes
- If Not Me, Who?
- Sitting
- Our Man in Havana
- No Kids

Standard Chartered Arts in the Park 2020: Auditions for Youth Dancers

Join us as a youth dancer at Standard Chartered Arts in the Park 2020 this November as the city gathers to celebrate the arts!

Calling all singers and Beatboxers! Join YAF’s a cappella group, and let your voice be heard!

Does your performance group have skills you’d like to show the world? If you dance, play music, do acrobatics, perform magic, do martial arts or have other performance talents… we’d love to have you join us!

Help us ignite someone's dream through art – together we can provide a supportive, rewarding experience and shape the lives of those who are less fortunate.